Mobile Marketing is Dead… on the Money!

Last week I attended a talk by Tomi Ahonen about mobile marketing and what is happening in the global mobile industry. The event was organised by the Mobile Marketing Association of South Africa and the Interactive Advertising Bureau of South Africa.

Tomi Ahonen is a best-selling technology and media author, strategy consultant, and motivational speaker in the converging areas of mobile telecoms, Internet, media, advertising, credit and banking, social networking and virtual reality. He has given talks in over 60 countries, over 100 cities, and has done over 350 conference presentations to a cumulative audience of 125 000 people worldwide. He spent the morning discussing the current state of mobile and focussed specifically on why it is vital to incorporate mobile into your marketing strategy. The following highlights are some of the interesting things that I learnt.

The Growth of Mobile

All the statistics that Tomi Ahonen presented were very recent and taken a week or two before the event. He forecasted that out of all media, mobile will have grown so dramatically that by the end of 2014, there will be more mobile subscriptions than inhabitants on earth. That is more than 7.3 billion subscriptions! Following mobile media is FM radio at 4.2 billion subscriptions and the Internet at 2.7 billion subscriptions which is significantly less than that of mobile. This is truly amazing considering that mobile has only been around for about 15 years.

A graph showing the growth of all the major mass media over the past 50 years.

You would really miss a major opportunity if you disregard mobile marketing as a key channel to advertise to prospective clients. The biggest problem for mobile currently is that there are certain user-experience issues that are holding the medium back. It is very important to understand these challenges and work towards avoiding them so as to not alienate your customers. Netbiscuits conducted a survey of 6 000 customers in the USA, UK, Germany, Brazil, India, and China regarding consumer dislikes on the mobile medium.

The results were as follows:

Advertisers and marketers often face a big challenge in that users find advertising annoying when using an application, playing a game, or navigating a website as it is distracting and makes the experience less enjoyable. According to the Netbiscuits survey, almost all of those users would rather not use the application or website and would most likely go to a competitor. What advertisers ideally want is to either draw users’ attention to the ad so that it leads to a click-through and hopefully a purchase, or to request more ads until they find something that they’re interested in.

Wait… what? Ask for more ads?! Who in their right mind would ask to see more ads?! Tomi asked the audience this question and no one raised their hand to say — “Yes, I generally want to see more advertisements”. But he explained how everyone has done it before. “Impossible!” you say. Well think about the last time you searched for something on Amazon. You’ve finally found exactly what you were looking for and are about to click on the purchase button when you suddenly notice a small carousel beneath the item which says: “Customers Who Bought This Item Also Bought…”. Suddenly you start to have second thoughts about the item you were just about to purchase. You take a look at the first few items in the carousel and then click on the arrow to show you more recommendations… and more recommendations… Now ask yourself the same question again: Have you ever specifically wanted to be shown more ads? I’m sure you’ve changed your answer from “no” to “yes”, right?

Amazon has found a very clever method to show ads to users without them being distracting and annoying. They have developed a sophisticated recommendation engine that remembers your purchase history and what you’ve searched for and, based on the results, shows you recommendations of other products that you might be interested in. This improves the entire buying experience and has helped Amazon up-sell to customers. Amazon says that around 30% of their sales have come from recommendations. 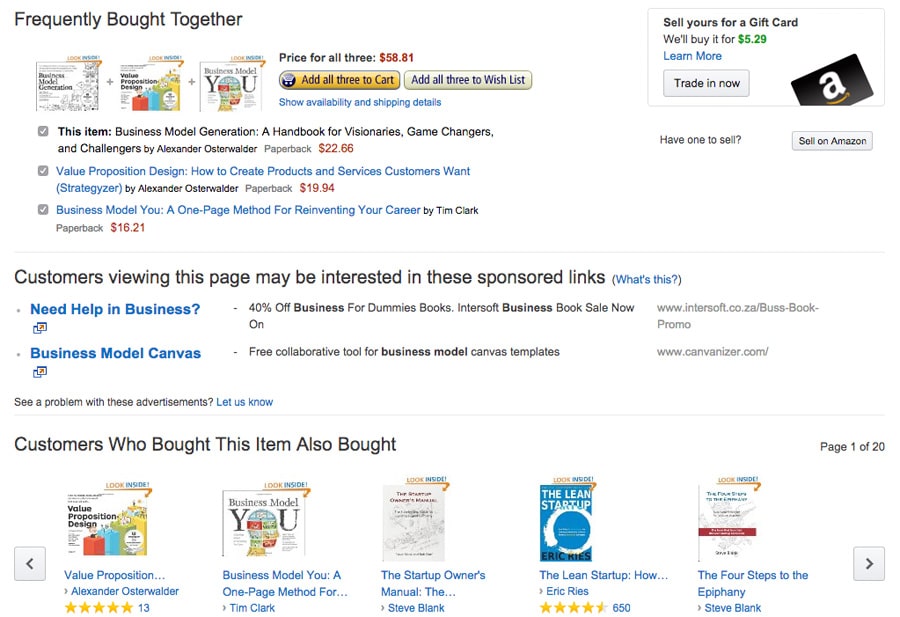 An example of Amazon’s recommendation engine.

Mobile Marketing as an Advertising Channel

A recent survey asked 7 000 U.S. teens what they use their cellphones for on a daily basis. The results were published in The Atlantic on 19 June 2014 and are pretty interesting:

Based on the survey results, SMS is still the most used feature on a cellphone. There is no doubt a massive opportunity to advertise through SMS or at least use it to engage customers via SMS. According to a 2012 Textmarketing survey of 1368 UK consumers, 89% would like to receive delivery notices via SMS but only 26% have received any; 84% would like appointment reminders but only 29% have received any; 68% would like SMS offers and discounts from brands that they have purchased in the past three months but only 12% have received any. The conclusion is that there is still a large gap in business and consumer SMS to engage customers.

What Makes Mobile So Unique?

According to Tomi, mobile is the 7th mass media. He named the other six:

The distinction between these various forms of mass media has to do with the unique abilities that set them apart from each other. As an example, both radio and television are broadcast mediums, but television allows the consumer to view moving pictures whilst listening to audio whereas radio can only be heard. So what unique abilities does mobile have that distinguishes it as a new mass medium?

A movie in a cinema is shown to a large group of people, but every person has his or her own mobile phone and can be reached on a much more personal level. Users have a lot more control over what content they consume on their mobile phones and as a result, user preferences are a lot more specific for mobile marketing.

You can have a laptop which is always connected but once you leave the Wifi hotspot area you’re suddenly offline. What about tablets? They can connect to mobile data networks, not only Wifi hotspots. But can they receive an SMS or a phone call like mobile phones? There are many smart devices that are mobile, but they shouldn’t be classified as mobile devices because they are not always connected such as smart watches, tablets, Sony PlayStation Portable etc. They generally need to be synced to a smart phone or connected to a Wifi hotspot in order to become connected.

You can carry your tablet with you wherever you go, but according to Tomi, tablets should rather be seen as ultra-portable computers. This is because the usage and behaviour of interacting with a tablet and a cellphone are very different. You generally need to be seated (e.g. at a coffee shop or on a train) to use a tablet efficiently. This is not the case with mobile phones as you don’t need to stop or be seated in order to use it. A new trend is moving towards hybrid devices such as phablets (really large screen mobile phones) or laptops that have touch screens and detachable keyboards which make them more like a tablet. Mobile devices need to be small enough to be carried around with you in order to be classified as a mass media device. The problem is that phablets are generally too big to carry in your pocket which reduces its ability to go everywhere with you.

Purchasing items have never been easier than with mobile phones. Apple has launched Apple Pay which allows you to purchase items easily using your phone. You no longer have to dig for your wallet in your pocket and find the correct card or the right amount of cash just to pay for an item. And since your phone is always with you, it makes purchasing things much quicker and easier. On other handset you can also make purchases from certain vendors using your airtime but it’s not as elegant.

Gone are the days when a brilliant new idea sent you searching frantically for a piece of paper to write it down on. Mobile phones are instantly available to you as a tool to capture your ideas. Smart phones are also becoming so powerful that there are applications available to you to not only make a note of your idea, but also to implement it. Think of a musician who suddenly gets an idea for a new song. He or she can instantly record that idea by opening an application such as Evernote or Apple’s Garage Band wherever they are.

There is a vast amount of information that you can get from your audience depending on how you execute your mobile marketing strategy. After asking users to opt-in to your service, you can track their location and have an automated discount coupon SMSed to them should they arrive in one of your competitors’ stores. Think again about Amazon’s recommendation engine. You can have an application that tracks what items people are most interested in and have personalised mobile marketing information sent to them that is tailored around their interests and needs. The retention and conversion rates are much higher with this approach because the user feels like they are receiving special attention.

Social media allows advertisers to track user preferences and opinions. This information is vital in understanding your customers and ultimately improving your mobile marketing strategy.

The camera on a mobile phone can be used to augment virtual objects onto items in the real world. Cosmetics companies can make use of the front facing camera on your smart phone to augment make-up on your face so that you can try out various colours of lipstick, for example, before making a purchase. Tissot, a Swiss watch brand, had a marketing campaign whereby users could place a paper watch on their wrist and then use the built-in camera on their smart phone and a special app to “try on” various watch styles before deciding on which one to buy.

Various watches are virtually augmented onto your wrist so that you can try before you buy.

Applications such as Google Maps and Street View allow you to visit real world locations on your mobile device. Some real estate companies even allow you to take a virtual tour of a house that you might be interested in buying without having to physically visit the property.

Where Will Mobile Go Next?

According to Chetan Sharma (7 July 2011), the world will change more in the next 10 years than it has in the previous 100 years. Looking at the enormous growth of mobile in its 15 years of existence, there are still many exciting things to come in the mobile world. Looking back 100 years ago, it’s amazing to think that Internet, radio, television and cinema didn’t exist. A lot has happened in the last one hundred years and mobile has only featured in fifteen of them. We just need to hold onto our hats and adapt to the exciting world of mobile mass media and, as advertisers and marketers, be constantly alert for new ways in which mobile marketing can help brands gain and retain customers.